The name of Cheb Khaled joined the trend list today via Twitter and social networking sites, because of the image of his smile while sitting next to Elisa, this image that became the most popular “comic” during the past hours.

Behind this picture is a story whose details were on the night of Khaled and Elissa’s concerts in the Riyadh season, where Rotana Radio conducted an interview with them behind the scenes of the concert, during which Khaled appeared with his famous smile.

We recommend: A Turkish actress washes her son with vinegar for fear of envy

Khaled appeared sitting next to Elisa with a wide smile on his face, and for a minute his face remained fixed on the smile as it did not change and did not participate in the discussion, but remained smiling the whole time.

The pioneers of social networking sites shared the image of Cheb Khaled from the video and created a group of funny and sarcastic comics from Khaled’s strange reaction.

Surprisingly, the audience considered Khaled’s smile expressive of his condition in many situations, especially those situations in which you do not find a real answer or reaction to things that may be difficult for you. 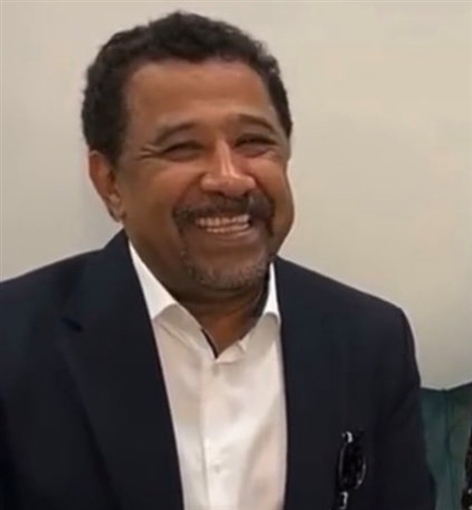 For example, one of them considered Cheb Khaled’s expressions to be completely compatible with his condition when studying mathematics lessons!

While another saw that the position of Cheb Khaled is an accurate expression of maturity!

But there was another opinion that Khaled’s smile is only a true expression of happiness.

Cheb Khaled and Elissa performed a concert on Friday evening, November 12, as part of the Riyadh season concerts.

The Saudi public welcomed Cheb Khaled and celebrated him with a worthy reception, whether by the audience present at the ceremony or by the organizers, who were keen on filming and photographing the scenes before appearing on the stage.

This ceremony is the second for Cheb Khaled in the Kingdom of Saudi Arabia. Cheb Khaled expressed his happiness with the ceremony and meeting the Saudi people. He explained in a media interview that he was received on his first visit to the Queen with the same warmth and warmth of reception that he felt today. For more details about the party

Do not miss: a new episode of the program “Analysis of Tones with Your Uncle Albat”, in which he talks about “Queens of the Stars”!

Ninochka, who became a bulge … She separated from Hassan Youssef because of a kiss and angered the young Najat and did not marry because of Adel Imam

From in front of the Kaaba… Omar Kamal calls for Hassan Shakoush: May God break it for you and no one will miss you (photos)

Majida El Roumi concludes the nights of the Arab Music Festival.. Find out the details

Andrew Garfield only told 3 people about his role in Spider-man: No Way Home.. Get to know them | news

“International Arabic Fiction” 2022 announces the long list and the jury

“With the artery” again on MBC1.. It hosts public figures loved by the audience and interacted with them

Khaled Sami’s son about his father’s health: She returned to her previous position

Watch how Shah Rukh Khan rewarded an Egyptian fan.. for this reason!

Egypt .. An artist publishes a video of the moment she was harassed in the street

The truth about the death of the Saudi artist Khaled Sami

Faten Moussa’s lawyer on the authority of Mustafa Fahmy: She wanted...

Tokyo 2020 Olympics.. Spain coach raises the banner of challenge before...

“Unbelievable” .. These two naive mistakes are behind the re-draw for...

I will not use an American remedy against Corona

A natural supplement that helps you fight the common cold