Riyadh – Mubasher: The Saudi General Authority for Competition announced today, Tuesday, that it has no objection to completing two economic concentration operations for ADNOC International Distribution Company, a subsidiary of the Abu Dhabi National Oil Company “ADNOC”, according to which the Emirati company acquires fuel stations in the Kingdom.

The General Authority for Competition said, through its official account on “Twitter”, that it issued its no-objection to completing the process of economic concentration between ADNOC International Distribution and Fuel Petroleum Services.

The authority added that according to this concentration, ADNOC International Distribution Limited will acquire 16 stations in the Kingdom of Saudi Arabia from Fuel Petroleum Services Company. 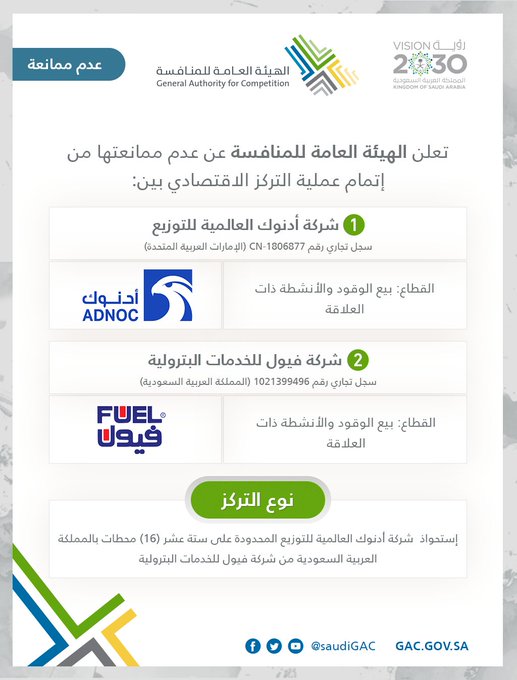 The General Authority for Competition pointed out that it had also agreed to complete the process of economic concentration between ADNOC International Distribution and Al-Majdal Residences Contracting Company Ltd. (operating in the fuel sales sector and related activities).

She pointed out that, according to the approval, ADNOC International Distribution Limited will acquire 4 stations in the Kingdom of Saudi Arabia from the Majdal Residences Contracting Company Limited. 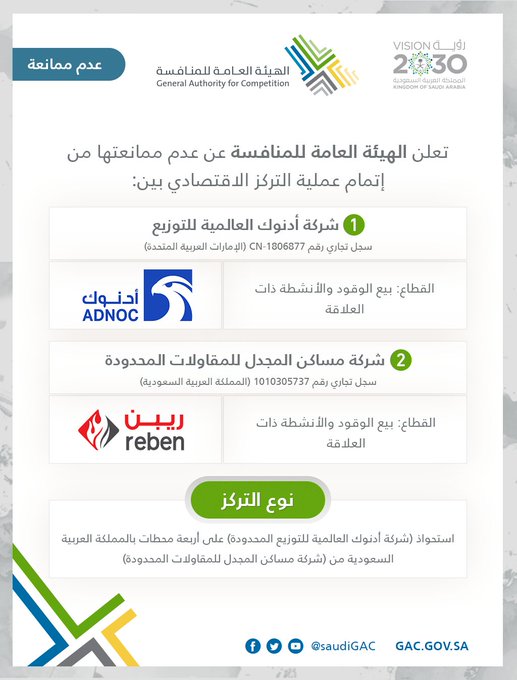 On May 5, 2021, the Saudi General Authority for Competition announced that it had no objection to completing the process of economic concentration between the UAE’s ADNOC International Distribution Company and the Mazaya Al-Oula Company, which specializes in road transport of goods and is registered in the Kingdom. .

ADNOC Distribution opened its first station in Saudi Arabia in December 2018, 40 kilometers from the capital, and opened its second station in the city of Hofuf in Al-Ahsa Governorate. With the completion of these two deals by ADNOC Distribution, the total number of its stations in the Kingdom is supposed to reach to 37 stations.

It is prohibited to kill or harm live animal fungal organisms

A message from the President of the Philippines to the Saudi King.. These are the details of appointing a special envoy to the Kingdom

Saudi Arabia… Disclosure of criteria for selecting “candidates for Hajj”

In the video, the body of a child missing 11 days ago was found in Saudi Arabia

Samsung is on its way to maintain the lead in the...

Despite the quarantine and precautions … Corona may reach you as...

Emirati women strengthen their presence in the list of global achievements...

Jordan – a new discovery to fight all types of cancer