Riyadh – Mubasher: The Minister of Foreign Affairs, Prince Faisal bin Farhan, headed today, Wednesday, the Kingdom of Saudi Arabia delegation participating in the work of the 155th session of the League of Arab States Council at the ministerial level.

Prince Faisal bin Farhan spoke during his speech, according to what was published by the Saudi Foreign Ministry on its official account on “Twitter”, about the Renaissance Dam crisis, the Kingdom’s support for the rights of the Palestinian people, as well as its efforts to support Yemen and the situation in Libya, as well as the sovereignty of Arab countries and the situation in the region.

The Minister of Foreign Affairs said that the Kingdom of Saudi Arabia stresses the importance of reaching a fair agreement regarding the filling and operation of the Renaissance Dam in a manner that achieves the interests of all parties.

The minister added that the Arab countries hope that their collective action will bear fruit in achieving the goals of joint Arab action, and the Kingdom affirms its interest and keenness on the unity, sovereignty and integrity of Arab lands, and does not accept any prejudice that threatens the stability of the region and supports political solutions to crises in the region.

Prince Faisal bin Farhan indicated that the Kingdom renews its rejection of all practices of the Israeli occupation against the Palestinian people and their occupied lands, adding: “I am reminded here of the praise and reference to the results of our last meeting last February, in which we are optimistic about future solidarity and cooperative steps towards Arab issues.”

The Foreign Minister called on the international community to exert more efforts to revive the peace process that achieves the establishment of an independent Palestinian state on the 1967 borders with East Jerusalem as its capital, in accordance with international legitimacy decisions and the Arab Peace Initiative.

On the Yemeni issue, the Minister of Foreign Affairs welcomed the Yemeni parties’ implementation of the Riyadh Agreement and the announcement of the formation of a government of political competencies that includes all components of the Yemeni spectrum.

The minister valued the Yemeni parties ’keenness to uphold the interest of Yemen and achieve the aspirations of its people to restore security and stability, stressing that the implementation of the Riyadh Agreement is an important step towards achieving a political solution and ending the Yemeni crisis.

The minister expressed the Kingdom’s condemnation of the recent escalation in Marib and the terrorist attacks by drones and ballistic missiles carried out by the Houthi militia against the Kingdom, appreciating the unified Arab position rejecting these practices that undermine the chances of a political solution and restoring stability in Yemen.

The Foreign Minister called for a positive response to the efforts of the UN special envoy in Yemen, stressing the supportive position to reach a comprehensive political solution according to the three references (the Gulf initiative and its implementation mechanisms, the outcomes of the national dialogue, and Security Council Resolution 2216. ““)

Prince Faisal bin Farhan noted that the Kingdom continues its relentless efforts to alleviate the suffering of the brotherly Yemeni people and support the Yemeni economy, as it is one of the largest donor countries to Yemen.

The minister pointed out that the Kingdom has presented a large number of initiatives and measures to support and enhance the economic and humanitarian situation in Yemen, the last of which was the announcement of a commitment to $ 430 million for the humanitarian effort for the year 2021 AD.

On the Libyan level, the minister said that the Kingdom affirms the unity and integrity of the Libyan territories and its territorial sovereignty, warns of the danger of regional interference in Libyan affairs, and supports the outcomes of the Berlin Conference, the provisions of the Cairo Declaration and the results of the vote of the Libyan Political Dialogue Forum, which was held under the auspices of the United Nations.

He continued: “We welcome the formation of the Libyan government, wishing it success and success in achieving the aspirations of its people for unity, security and development.”

The Minister of Foreign Affairs affirmed the Kingdom’s support for the brothers in Iraq; To achieve stability at all levels, away from interference in its internal affairs, stressing the importance of joint cooperation in confronting the threat of extremism and terrorism as an existential threat to the countries of the region and the world.

The Saudi Foreign Minister warned of the seriousness of the threats facing the Arab region. And the Iranian regime’s continuous violations of international laws, charters and norms by threatening the security and stability of states, interfering in their internal affairs and supporting armed militias that sow chaos, division and devastation in many countries.

Prince Faisal bin Farhan referred to the Kingdom’s categorical rejection of the Iranian regime’s occupation of the three Emirati islands (Greater Tunb, Lesser Tunb, and Abu Musa), calling on the international community to assume its responsibilities regarding the threat posed by these hostile practices to international peace and security.

On the sidelines of the ministerial meeting, the Minister of Foreign Affairs, on behalf of Crown Prince Mohammed bin Salman, received a certificate of appreciation for the Arab Development Action Shield for 2021.

The League of Arab States awarded the prize to the Crown Prince; In recognition of his role in promoting the comprehensive development approach in the Kingdom of Saudi Arabia and the Arab world, and his efforts in supporting and promoting joint Arab action in all fields. 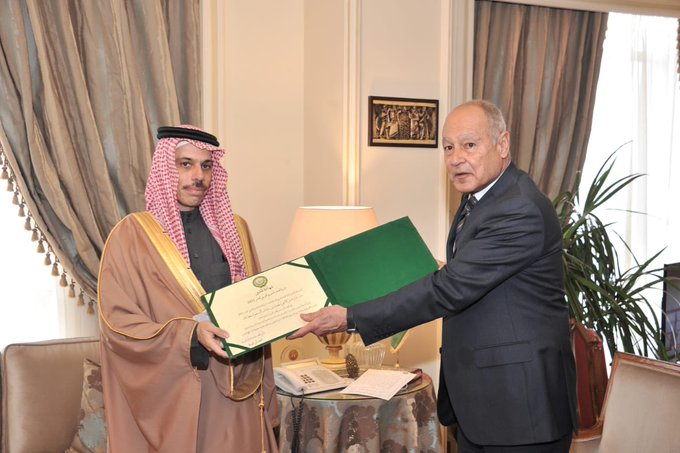 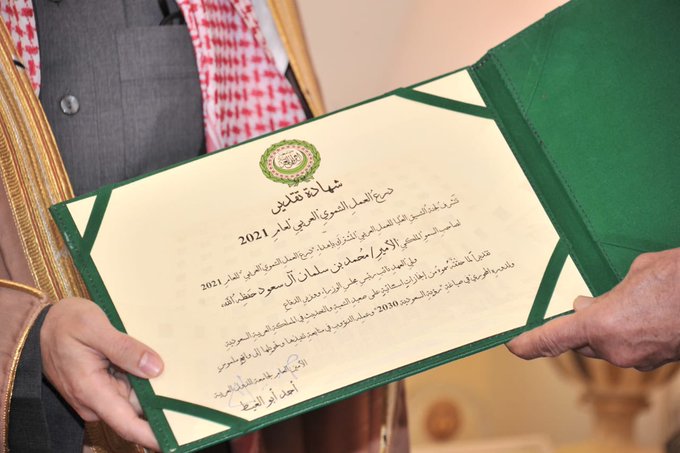 Saudi Minister of Health: We will provide Corona vaccines in community pharmacies for free

With the Houthi attacks increasing, Greece lends the Patriot system to Saudi Arabia

Saudi Arabia offers condolences to Chad on the death of the President, and stresses the need for calm

Saudi Arabia found an alternative to the alliance with Israel

Saudi Arabia: Corona caused the closure of 700 mosques within 72 days

Mental health disorders among Syrians … a present epidemic and absent...

Morocco’s message: The secret of the five matches reveals Wydad and...

Real postpones the fate of Zidane

Kuwait unveils incentive package for banks to face the repercussions of...