Cairo, Egypt, OPPO – the world’s leading technology brand – announced the launch of its latest products in the Reno series of phones, the Reno5 5G and Reno 5, in Egypt. Given the leadership of OPPO phones in shooting videos, the Reno5 5G is the expert in portraiture with artificial intelligence that enables you to express your best and inspires you to the slogan “your life in pictures”, which refers to documenting important moments with those you love to share memories together. The phone is also an icon of fashion-makers with its elegant and ultra-light design and stunning colors that will make you stand out! Also, fast charging and support for 5G networks make you enjoy the things you love easily and quickly. 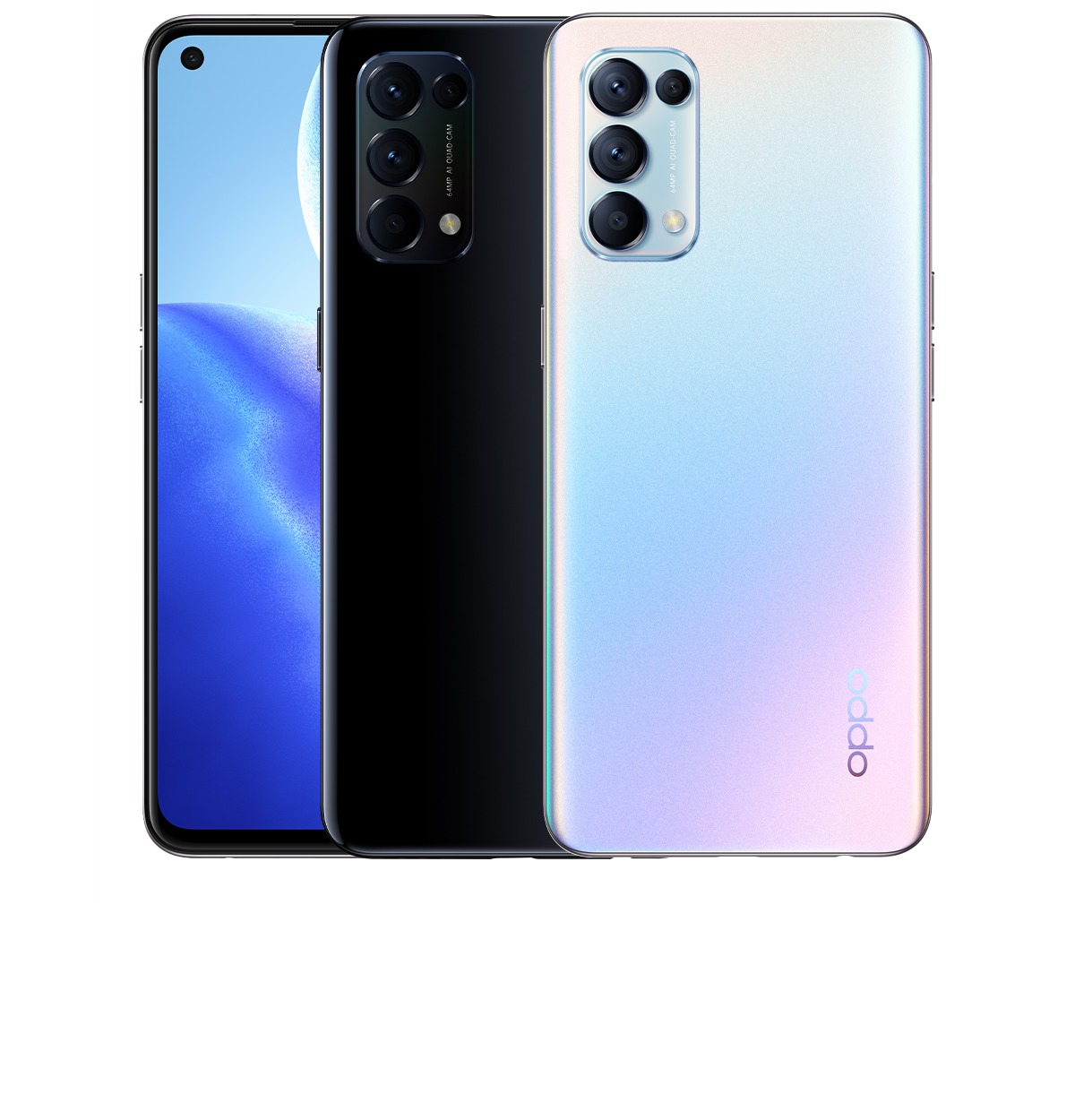 In addition, OPPO’s Portrait Beautification Video feature for the first time for videos uses artificial intelligence to detect up to 124 major points on the face, with a dedicated processing app that helps you shine with your natural beauty. This is in addition to other advanced technologies, including the 50W Flash Charger in Reno5, the 65W SuperVOOC 2.0 Flash Charger in the Reno5 5G, the AMOLED display with a refresh rate of 20Hz, the 5G support in the Reno5 5G, and the elegant and light design available in two amazing colors in the two versions. It makes the Reno5 Series the ideal choice for fashion makers all over the world.

“The smartphone today is not just a tool for recording our memories – it is a partner that enables the user to preserve the unforgettable moments that we share with our friends and family,” said Yves Han, Brand Manager of OPPO in Egypt, expressed her happiness with the introduction of the new Reno5 series of phones. With the revolutionary camera technology that works by combining the features and power of the phone’s hardware with the features and innovations of the operating system together, it gives users the ability to revive colors and illuminate their world in a distinctive way. By easily capturing and preserving great photos, day or night, the Reno5 Series leads us to the motto of “your life in picture”.

Capture your best with the AI ​​portrait expert

The Reno5 series powered by Full Dimension Fusion video portraiture system takes the quality of portraiture video to an advanced level using the AI ​​Highlight Video feature – a feature that automatically detects the surrounding light in the scene for the first time in the smartphone industry, and improves the video quality according to the ambient light through OPPO’s Urtla Night Video feature and Live HDR feature. In the case of dark lighting, the Urtla Night Video feature will automatically turn on to brighten the scene and improve the lighting, while the backlit scene detection will use the Live HDR feature to reduce uncomfortably exposed areas. Both functions work to produce video with better brightness, less noise, and clear natural colors that you get with just one click of the AI ​​button while shooting a video.

The performance of selfie shots in the Reno5 Series has also been greatly enhanced with the use of the OPPO Image-Clear Engine. Which enables internal optimization for users to capture clear shots of moving objects. And the Engine Image-Clear Engine makes capturing life’s quick moments easy for the Reno5. The phone also supports an ultra-high definition image with a resolution of 102 mega pixels, which can bring out unprecedented rich details and textures in a personal photo.

In introducing these advanced developments in video and photo quality, OPPO hopes that users will be able to take advantage of the capabilities of the 5Reno series to highlight their personality through the camera of their smartphones.

To achieve this, Reno5 Series has provided another industry-first video feature in the Reno5 version, AI Mixed Portrait. By integrating a vertical video in another video in the background, the AI ​​Mixed Portrait feature brings the effect of double exposure video for the first time in a smartphone, allowing a new artistic effect, and this feature comes with two different artistic modes where users can customize how the vertical video is combined with the background video , Which leads to fun and imaginative results.

In Reno5 5G, Oppo introduced Portrait Beautification Video feature, a feature that is able to detect up to 124 major points in the face to provide optimizations designed specifically for each individual, this feature contains 3 different customizable tools, providing more freedom to improve image details. Users can also access different beauty effects for group photos, highlighting the diversity of each individual and creating a different look to suit everyone’s tastes.

The new Dual-view Video feature available in the two versions enables video capture from the front and rear cameras simultaneously. The dual-perspective recording function makes it easy to show you what you’re shooting in the same video frame simultaneously – ideal for Vloggers or vloggers who want to stay in the action all the time.

Reno5 also retains the image features for which the Reno series is world famous. This includes AI Color Portrait, Monochrome Video, 960fps Smart Slow-motion, and finally the Night Flare Portrait feature, which together provide a more comprehensive set of creative tools for you to realize your style through photos and video.

In addition, OPPO’s premium and easy-to-use app, SOLOOP, can now be accessed through the Reno5 camera interface, giving you the option to easily edit high-quality videos using professional-quality video templates and editing tools.

Reno5’s 44MP front camera, enhanced with AI-enhanced sensor, supports futuristic touch-free interactions. And the privacy of smart messages automatically detects if someone else is looking at your phone and hides notifications accordingly; Smart AirControl also enables you to answer or reject a call, and scroll through apps using hand gestures; The Smart Always-on Display prevents the Reno5 screen from dimming or shutting down while using the phone.

Life is faster with the Reno5’s 50W Flash Charger and the 65W SuperVOOC 2.0 charger on the Reno5 5G.

Shine with the iconic Reno5 design

The new design of the Reno5 is sure to be a symbol of fashion and elegance.

The Reno5 comes in two colors: Fantasy Silver and Starry Black, while the Reno5 5G comes in two colors: Galactic Silver and Starry Black. With the all-new Diamond Spectrum feature / feature, Reno5 colors create a new visual effect that can highlight thousands of colors. When viewed from different angles or in different lighting, the phone appears in completely new colors. The final touches were also given to Reno Glow, a unique glass feature designed by OPPO, which gives the outer cover of the phone shiny details and parts, as if millions of diamonds are embedded in it, making it resistant to fingerprints.

The Reno5 is elegantly designed to be slim and sleek. Where the phone weighs 12 grams, and the Galactic Silver version it weighs 190 grams. Its thickness is less than 2.2 mm, and the phone benefits from advanced COF technology to reduce the bottom edge of the screen by 2% compared to Reno4 to only 2.2 mm, providing an immersive experience that carries the meaning of the full screen with a screen-to-interface ratio of 21.2% compared to 20 .۷% in Reno4. In addition, the hidden fingerprint at the bottom of the screen has been integrated to ensure instant unlock while keeping your data secure.

Reno5 features a 6.4-inch AMOLED screen supporting a 20Hz refresh rate with pinhole design, with a resolution of 2400 x 1020 pixels FHD + and a smooth refresh rate, offering you a reality-like entertainment experience. The Reno5 also comes with Netflix HD and Amazon Prime Video HD certifications, allowing you to Show content in more detail. Moreover, the low blue light screen, which has been fully tested, verified and approved by SGS, is designed to protect users’ visibility under prolonged use.

By supporting the possibility of comprehensive customization, Reno5 users can design their own Always-on Display, and the dark mode also makes the phone suitable for their personalities..Other innovative features such as Flexdrop and three-finger translation with Google Lens greatly increase productivity. Meanwhile, Game Shortcut Mode, Gamer Mode, Bitmap Message and Adjustable Game Touch create an environment for you to fully immerse yourself in luxury. Security has also been improved at the operating system level with the use of a proprietary system – allowing users to create multiple accounts on the phone using split applications and data. Data protection on the phone has been approved by third-party organizations including ISO, ePrivacy and TrustArc, making sure that your personal information is always stored and transmitted safely.

Placement in the market

The Reno5 will be available in the market in two colors: Fantasy Silver and Starry Black. All colors will be available for purchase for customers at a price of 5990 EGP. The pre-order on the two phones will start from February 24th until February 28th

Samsung Galaxy A22 4G spotted in the BIS database

Serious WhatsApp vulnerabilities discovered (here is the solution) in my country

Video .. Cairo’s sky is witnessing an astronomical phenomenon for 4 hours

Google Assistant gets a bunch of new features

A useful Telegram feature that not many people know about

The new Timelapse feature on Google Earth to see the biggest changes on the planet!

It is not a treatment or a vaccine, but a major...

After Texas, California is the second US state to record more...

How I missed to wear and walk your streets, Beirut …...

This is an appointment .. Watching the moon joining the flower...

Chiellini: Ramos obstructed the fit of “striking teacher” – the athlete...

Destroying a drone .. The Houthis announce targeting King Khalid base...