A scene in the Egyptian “Prince” series, starring actor Mohamed Ramadan, sparked the interest of football fans in the Arab world, where one of his heroes appeared wearing a shirt Manchester City England champion in the last two years.

The Manchester City club commented through its official account, “Twitter” for social networking, on the appearance of singer Diab, who plays the role of a professional killer, by publishing his picture, wearing a club shirt, during an attempt to kill Mohammed Ramadan in the series.

City said, caressing: “We do not have this morality, oh Diab.” 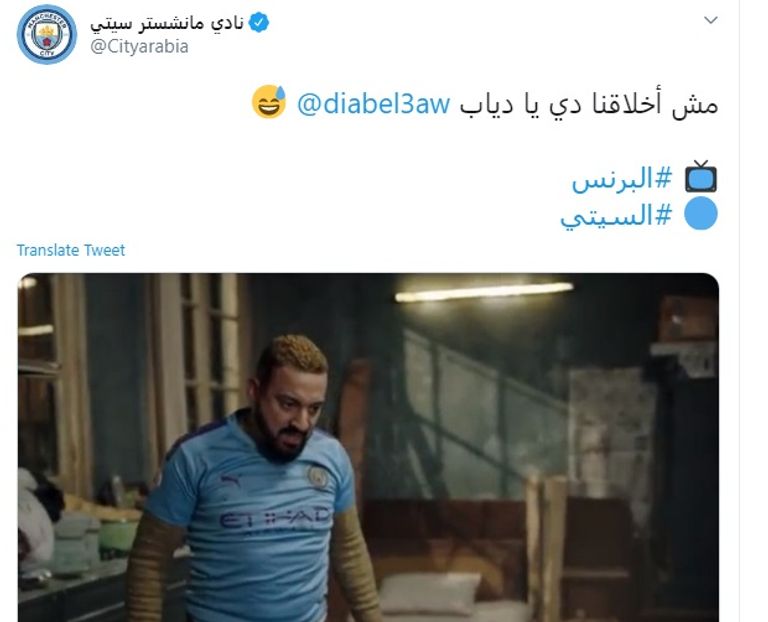 The singer Diab commented on the tweet, saying: “But the morals of Kutkut,” which is the character he was representing.

Carole Samaha wants her followers to do a new work (video)

Watch .. the song “Ya Bakhteh” by Hani Shaker and Ahmed Saad exceeds a million views in 48 hours

Recently released .. the story group “Dust of Spirits” by the Iraqi Khaled Al-Shammari

The “Kiss at the Temple” scene puts Netflix in big trouble

Najla Badr catches the eye in the latest photo session

Najla Badr catches the eye in the latest photo session

Founder Othman Episode 36 Announcement 2 The Resurrection of Othman Islam Girkutai and the return of Songor Teken in the new episode and the...

Recently released .. the story group “Dust of Spirits” by the Iraqi Khaled Al-Shammari

This series is the longest in history

Google and Apple boldly delete an Arab country from the map

Documentary: Princess Diana affirms the need to “step aside” to allow...

In the British press: the reserves of plane travel in the...

News 24 | “Infographic” explains briefly the violations of the regulation...